Detroit King and beyond Rap God, Eminem, has never held back from brutal lyrical attacks that target every walk of life from political figures, public figures, reality TV stars, artists, actors, singers, family and musical acts. Carving out nouns and verbs and mixing up words from his manic psyche is what has morphed Em into a legend that cannot be contained at any level of his game. Eminem has used human beings that are sources of his rage as puppets for his material, and it is a fact that you do not want your name involved or tossed under the bus. Eminem literally cut a hole in his ex-wife Kim’s heart and his own mother Debbie over a variety of tracks and insightful bars that engraved pain and will haunt them both to their graves. Em’s seamless orchestration of intricacy and brilliance when he is stitching together his rhymes is unexampled and if he does make you an example, get ready to get verbally trampled. Here are 12 times where it could have been perceived that Em crossed the line over the years by ruthlessly calling out his peers. 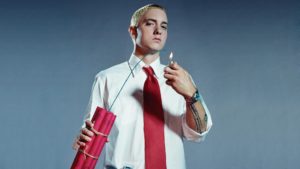 “Think for a minute, ‘cause the hype just died down

And flip whatever ain’t tied down upside down

I’m all for America; fuck the government!

Tell that C. Delores Tucker slut to suck a dick.”

“So if I said I never did drugs, that would mean I lie and get fucked more than the President does

Hillary Clinton tried to slap me and call me a pervert

I ripped her fucking tonsils out and fed her sherbet, bitch.”

The can of whoop ass with the Shady/Aftermath lid

You pop off the top, it’s like opening vats of acid

Beat the Octomom to death with a Cabbage Patch Kid.”

“They say that love is powerful as cough syrup in styrofoam

With the ugly Kardashian

Lamar, oh, sorry yo, we done both set the bar low.”

You better get one…”

“My mind won’t work if my spine don’t jerk

I slapped Garth Brooks out of his rhinestone shirt

I’m not a player, just a ill rhyme sayer

That’ll spray a aerosol can up at the ozone layer.”

“Who’s knocking at your door, people hit the floors

“If you was really sellin’ coke, well, then what the fuck You stop for, dummy? If you slew some crack You’d make a lot more money than you do from rap.”

Track – “Nail in the Coffin”

“Y’all act like you never seen a white person before

And started whoopin’ her ass worse than before.”

If Affleck can get his ass licked, how come I can’t?

While I watch Whoopi Goldberg scissor with Oprah.”