If there has been a critical influence to the Hip-Hop game this year who has not received the proper credit, it is Canadian DJ and Record Producer, Kaytranda. Dropping a debut album that features a genre-expanding extravaganza of universal talent and production that is impressively clean, Kaytranda is glowed up as he stunts on his competition and sails his own boat with a crispy-clean approach. ‘99.9%’ was released on May 6th, 2016 through XL Recordings and it features fifteen addictive tracks with infectious melodies, a variety of dance-floor oriented and smoother soulful aspects, and boundless versatility within catchy synth melodies and smooth bass lines. The album’s third track, “Got It Good”, is as smooth as butter as Craig David steps in to take it to another level while serenading the ladies with his sexy vocals. The entire album leaves listeners hypnotized, which has left music lovers passionately surprised that Kaytranda is nowhere in sight on 2016 album of the year lists. Let’s celebrate ‘99.9%’ as an album that didn’t make the big wigs lists yet leaves you hungry for more. Here are the top ten lyrics that are laced within Kaytranada’s euphoric production skills by artists ranging from Vic Mensa to Little Dragon. 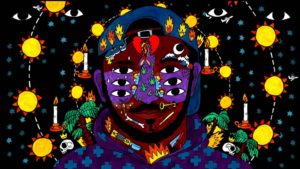 But here’s my credit

Why not go max it

The fact is there’s no stress

Baby I got this

Treat you like the queen in Buckingham Palace, yeah.”

Let it flow away and never mind it

It seems so much more

So you never find a way to forgive, to forget, to be unconditional.”

“She’s burning here below my mind

Those illusions but I can’t deny it

She’s burning in below my mind

Boy you blew my mind

But I’m tired of my heart being broken

And my love being taken for granted

I gave you all I had

How you wasted my time

How you reached that borderline.”

“I feel raindrops falling washing off my tears

I been walking through a daydream all my years

Oh I do believe in world peace my dear

Wise women will call your name

If you believe in impossible things

If you believe if it grows from seeds to a beautiful tree.”

The tightrope of love in your circus babe

If I were to fall, it’d be my last day

Even though you’re right under me.”

“Got no hands on my watch

I don’t clock the time cause

There’s no need for hesitation when you’re swiping.”

“One night on the scene, and they can see you

Track – “One Too Many” featuring Phonte

“I can feel it in the air it just grew thin

Then the numbers they be counting coming in

Do you believe in world peace my friend

I be on Sunsets then go back to 68th and Stony

Cooked out my basement

Dropped my tape and got my homies’ placements

I’ll play the keys in my sleep on the beach, that’s a dream vacation.”