Tech N9ne has been a class act and highly critical figure within the Hip-Hop world ever since the mysterious man from Kansas dropped his debut studio album ‘The Calm Before The Storm’ back in 1999. Setting himself up with a debut title that is relevant to the massacre that he has put upon the game, Tech is 11 solo albums deep and has just released a 32 track banger, ‘The Storm’, that is full of lyrical thunder and lightning from the Strange Music empire that Tech brought to life with his partner, Travis O’Guin. Tech’s signature delivery is a force in which he carries the torch for an alternative and authentic style that represents his finely tuned inner life. Tech attempts to connect with the broader scale and has never set himself apart from the community of dedicated fans that have been down to ride with him ever his first major single, “Questions” and the days of selling one million albums independently. Tech does not disappoint within this 32 track release that is a treat for both underground and mainstream Hip-Hop junkies. Here’s 10 of the hottest verses from the genre-pushin’ musical heat. 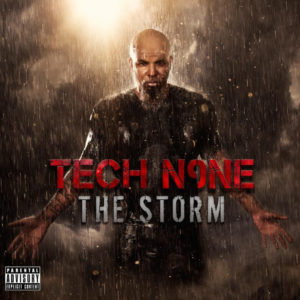 “When I was a young one the preacher put oil on my sixth chakra
He knew when I was older I’d wanna follow 2Pac and Big Papa
They thought I was so devilish in the dark I would listen to sick opera
But this choppa will be reppin’ the city where RDV’s Young Rich and Slick’s got ya.”

“Er’body, but me
Lookin’ broke and, dusty
That’s how your lady look at me, that’s why she wanna, cuff me
I’m gonna shine never, rusty
Every year I come back with another one they never gonna hush me”

“Tech is highly respected
Been with a few major labels and left it
I rated my records intrepid
Since they didn’t rep it then F it
Now I’m elected to get the check and invest it
I’m such a vet you can bet I can get you connected.”

“Don’t get in the game
If there’s a feeling you can’t hang
Women tell me that I should be loyal to one dame
It’s a shame, they say I’m a playa and I never change
I remain, how we start out the same
And I can never get with it, you can give it to whomever wanna get it
Now that I’m seeing vivid you come at me I’mma pivot and
Get up out of your room, treat me like a buffoon
I can see you love her to the moon
I cannot lie I’m hella busted, they say I can’t be trusted
I ain’t got time to love shit but this does it.”

“Sat in hell for a whole lot of years
Bread and tales I got a whole lot of cheers
Sold out shows, so bout those, foes doubt flows but bros oughta hear
Change in the making
Deep in the midwest something insane been a-baking
They claiming a nation with brain innovation
Surrounding everyone with Strange integration”

“He talking hella shady
How I get it on the daily
They jelly bout my gravy but they crazy cause they think I won’t be banging like the 80s.”

Track – “No Running To Your Mama”

“You got your vape, you got your brownies, you got your taffy
You got that shuttle to blast me the grassy zipped tight in a baggie
Then we’ll try it be the highest man I quit now cannabis and I is reunited
Be delighted we going to see the itis if you wanna chop away the deficit, legalize it.”

“You know the rules of the game
Your bitch just chose me
We can handle this like we got some class or
Get into the gangster shit if you tripping low-key
Women is never nothing to steal
When you making hella bread and you go from here to Brazil
So you gotta know I’m the nigga that she wanna get to for big thrills for real.”

“So let’s spark a blizzy, take a drizzy, pop a pizzy, get so dizzy
Grab a brizzy, then get busy, Kansas Cizzy in Missizi
Cause the way, my bank account is set up, I can’t be the dad
But after 12 AM I can bread up, then it’s on
We’ll be gettin’ zoned to their moans
DTF ladies comin’ to make a poan, we record it with a drone.”

“I get grim like no other can
Christian household my mother ran, in this gutter land
Then she married a good Muslim brother man
So I had a hell of a lot of teaching
We leave sin on the table with the goodness and feasting
Eating like cannibals we’re the animals beasting
Seeking the enemy who invented these preachings.”