Stirring up trouble has been the name of the game for Brooklyn MC, Young M.A, who had a breakout year as one of the top female MC’s with some of the most brutal lyrical deliveries. Amongst a variety of rumors, the far from humble Young M.A reportedly jumped in a fans face due to the fact that they weren’t filming her live show on their phone. No matter how hard you try, it is difficult to deny Young M.A’s talent from the moment that she dropped her 2015 mixtapes, ‘M.A The Mixtape’ and ‘Sleep Walkin’, which carry some of her most ballsy tracks that carry a range of facts, brass tacks and bloodthirsty gabs that fire shots at her “bitches” and tell of her story from rag to riches. There has not been a female that has touched her expertise in 2016 and with her steadily climb to the top, Young M.A sure ain’t gon’ stop throughout 2017. Here are seven of her most standout rhymes from her boundless discography full of open and honest lyrical spills straight from the heart. 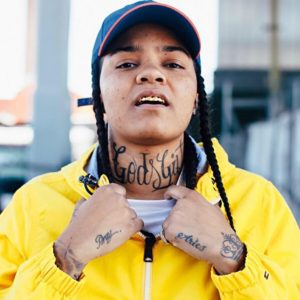 “My squad is a bunch of niggas with no manners
We hold hammers
Better duck when that gun flash, no cameras
No jammin’, my gun blammin’
Your bullets flying but not landing
God damnit, my hands cramping
This big cannon do big damage
Heat on my side, my hip tanning
My nigga Danger keep the grip near him
They shot my nigga like 5 times but he’s still alive and he’s still standing
B.I.P to my big bro from 88 to 09
I swear to god it would be problems if that nigga was still alive
Tell these niggas don’t fuck with me
I’m not in the right state of mind
Put the Desert Eagle to his forehead and make the nigga have a change of mind
Stop talking that tough shit cause you dyke bitches ain’t bout that
Heard niggas out here rattin’ so I had to set up my mouse traps
Blow a stack and I bounce back
Hit me up for that loud pack
Got shishkaberry, got cookie kush
Got white widow, a whole pound of that
Fuck a squad, I’m three deep
You got 10 niggas that’s 10 sheep
Plus these pussy niggas don’t want beef
Cause they all chicken, 10 piece”

“I represent BK nigga, fuck the cops and the DEA nigga
Fuck a snitch and the he say she say nigga
Old honey bun cheesecake nigga
Goons run up like a relay nigga
It’s no games, no EA nigga
Eat your food and leave you with a clean plate nigga
Fuck a fraud, fake three face nigga
Put you in a box like a sweepstakes nigga
We mixing sour with that cherry kush
Why you smokin’ on that Reggie Bush?”

Track – “Get This Money”

“Tunnel vision on cyclops, you bozos in my blind spots
Cause I can’t see y’all, my level is on sky box
Got the game locked, I’m on top like a shot clock
I can do this shit on one leg like it’s hop scotch
I be where them cops not, I be where them Glocks pop
Pain got the Glock cocked, put it to your snap box
Shawty make it pop lock when I’m in that thot box
My dildo stay hard, yeah, I got that rock cock (OOOUUU)
I say what I wanna say
Dykes got my name in they mouth every other day
Talking on the internet, fuck it, I’ma sip to that
Cause if I really wanted to I could put it into that
M.A. been a threat, call me “Mrs. Get Her Wet”
Cold hearted, fly nigga bitches call me winter fresh
I’m back on my bullshit
Still in the hood on my hood shit
Still walk in the corner store buy a wood tip
Still got the P-89 with the full clip, still
Still buy the four chicken wings from the Chinese
Still run up on Mr. Softy for that ice cream
Still looking at a fat ass in them tight jeans”

“These niggas ain’t ‘bout that
I put that lil pretty black barrel where they mouth at
You say you getting money, um I doubt that
Throw a rack at ‘em like nigga go and count that
Pain
I don’t kill shit, I massacre
I always keep a pretty bad bitch in my passenger
I tell her get her ass in the back if I’m mad at her
And if I see another bad bitch then I’m after her
Pain
A wise nigga told me wise up
Said even when your head down, always keep your eyes up
My brother was a blood, that’s why I throw that five up
He died from that shit, that’s why I keep that nine tucked”

“I don’t open doors for a whore
I just want the neck, nothin’ more
Shawty, make it clap, make it applaud!
When you tired of your man, give me a call
Dyke bitches talking out they jaw
Next minute, calling for the law
This 9 will have ’em calling for the Lord
They ain’t getting shmoney, so they bored”

“Uh, driving through Brooklyn sipping this Hennessy
I knew this break up would get to me eventually
I’m all drunk and shit, look what you did to me
I wonder if you still love me or even missing me
Or even mention me
Fucking these bitches ain’t helping my pain mentally
Only physically
Cause I don’t love em I don’t give a fuck about em
They only good for a nut, shit I’m better off without ’em”

“Mama wondered why I never liked to wear a skirt
Or wear a purse, I tried to be girly once
But fortunately it didn’t work
I’m coming up something like a hiccup burp
You running up, see that’s gon’ get you hit and murked
You tryna fuck cause I can see me in the skirt
Double cup sippin’ on the Henny, blowing purp
Ring ring the labels calling, so let’s see what the labels talking
You tryna get the fortune, we tryna build a corporate
Then incorporate the fortune”