The 21 year old conscious hip-hop genius has been making waves in the music industry ever since 2012 as one of the youngest and most enlightened kings on the mic. The man with fire in his heart and a bar-spitting technique that is entirely unique dropped his first mixtape in June of 2012 titled ‘1999’. The independently released project reminiscing the good ol’ days of 90’s rap music features beats from the late and great, J Dilla, and delivered a mixtape that any true underground hip-hop head could appreciate. Joey is a storyteller spitting bars reflecting days in which his mother slaved her days away on her 9-5 to keep food on the table for her children and a roof over their head. After the mixtape initial success, Mr. Badass declined a deal with Jay-Z’s Roc Nation Label and decided that the independent route would be the course of action for his career.

“I’m from Flatbush. I’m the first one from my immediate family to be born in The United States. Coming up in Flatbush, being raised by West Indian parents, you’re the first-hand experience for your family, living here in this new country with them coming from the Caribbean. It’s a different way of living, but we’ve maintained. I have three brothers, and one sister. And I’m the second oldest. I’m my Mom’s only child.” – Joey Bada$$

As a result of a few Youtube videos, an overwhelming number of viewers began talking about Joey’s talent and the intellect that he developed at a young age through life struggles and experiences that is typically solely heard from seasoned and developed rappers in the game. His matchless wordplay caught the attention of Jonny Shipes, President of Cinematic Music Group and from there on Joey began working with his team and his mob of twenty by the name of Pro Era. Pro Era is a progressive movement of young, leading-edge talent that fulfill everything from rapping, producing, singing and graphic design. The ease in which Joey inhibits his role both on and off stage is plain to see. Being raised in Brooklyn, New York, Joey has encountered and worn many hats at a young age in which he derived the wisdom which continually spreads fire over his studio albums and mixtapes. 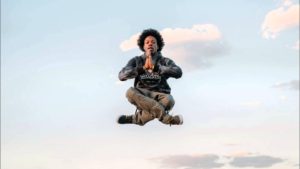 Joey’s dear friend and co-founder of Pro Era, Capital Steez, took his own life in 2012, which impacted the gang of brothers and Joey in particular tremendously. The MC born Jamal Dewar was only 19 years old. Capital Steez appeared on various Pro Era projects, including Joey Bada$$’s breakthrough, “Survival Tactics”, and the Pro Era mixtape, ‘Peep the Aprocalypse’. Joey remained fairly quiet about the death of his dear friend and partner in crime and let it all shed over his mixtape and albums.

Joey released his third mixtape by the name of , ‘Summer Knights’, in July of 2013 which really cemented his name as one of the hottest new artists in the game. Mr. Badass’s wit and intelligent hustler mentality shines over tracks such as “Hilary $wank”, “Word is Bond”, and “Trap Door”. Joey became a force in Hip-Hop and has yet to stop.  Joey’s debut studio album, ‘B4.Da.$$’, dropped in January of 2015. The vinyl, swift sound is just as meditative as it is brazen. Joey truly inflicts a sense of nostalgia over hardcore beasts reminiscent of the kings of East Coast rap such as Biggie, Nas, the Wu-Tang Clan and A Tribe Called Quest. Joey’s New York accent recreates the 90’s hip-hop vibe and scored him rave reviews across the map.

Joey is the walking, talking, spitting answer that has turned his Hard Knocks into an opportunity to give back to all of those on the come up. Joey is known for regularly playing free shows and inviting all of his family and friends over social media. Joey invites all of his fans to the locations of his music video shots and ensures that they are all a part of the magic that he creates. Joey knows exactly how it feels to come from nothing and gives back in a manner in which fans will never forget. Joey tore up the stage at Coachella 2016 in Indio, California where he released his new track, “Devastated”, which talks about the days in which Joey kept mentally fighting through the ups and downs in life and the time in which he overcome the strife. Joey is not only one of the hottest rappers in the game; he is a humanitarian that deserves to be recognized for his efforts to further connect all walks of life. Hats off to you, Joey. Keep doing you and doing what you do.