Lemme give you the quick 411 about the 313; Detroiters are a different breed. Living in the midst of an ever-changing landscape with much at stake has injected inspiration into the veins of aspiring underground rappers branching from the Linwood Liquor corner store all the way to the neighborhoods outside of the assembly plants for Ford. Detroiters carry their roots as a badge of honor which carries the weight of tragedy, discomfort and wonder. Street cyphers on the block come with the risk of getting shot and emcees spittin’ the truth is happening outside on the streets rather than in the booth. Here are three of the hottest underground rappers from the Motor City who aren’t afraid to go hard in the paint with zero pity.

There ain’t no turnin’ back once you get your hands on the Detroit rapper Cooperachy’s collection that emblazons youthful defiance and showcases Coop’s ability to create tracks that are timeless. Cooperachy’s infectious skill set is firmly-rooted and expanding within every rhyme that is dished out with precision laced on each line. On the brink of success stemming from his latest release, “Champion”, Cooperachy is gearin’ up to deliver another run for your money with his upcoming track, “The Whole Night”, that’ll stir up your hunny with just the right amount of delight. Motivation, inspiration and dedication are the three words that come to mind when describing Cooperachy’s technique that is truly one of a kind. Do yourself a favor and check out Cooperachy on Soundcloud.

Although on the road to mega-stardom, Detroit-based rapper, GT, has his roots grounded in the underground and makes it known through his rhymin’ fire that he aspires to succeed and continually rise higher. Known for his music videos and visuals that gets thousands of hits stemming from the words that GT spits, if you want to see the real Detroit shit that goes on each and every single day, you’ve landed on the most authentic and downright raw musical terrain. At the ripe age of 25 years old with enough life experience to already be spittin’ tales that’ll never get old, check out what GT has to offer. 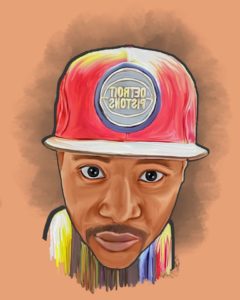 The hustle is real within the veins of Detroit’s own, FlyBoi Rich, who flows and maneuvers over beats with a technique that ranks amongst the elite. Stacking tracks within his abundant catalog, FlyBoi’s talent is buzzing around the city and expanding around the globe. The tongue-twisting underground MC is also the CEO of Dopeish Production and owner of Rolemodelz Clothing. Flying under the radar with booming tracks such as “Jesus on the Moon”, “Know da Real” and “Detroit Dreams”, FlyBoi reigns supreme and is certainly not allowing anyone step in the way of his dreams. Check out FlyBoi’s catalog on Tidal.