It takes a special breed to enamour a crowd with a bizarre and eccentric style that takes listeners on a whirl into another world. LA-bred rapper, Hopsin, has been a bloody hip-hop spectacle ever since he dropped ‘Gazing at the Moonlight’ on Ruthless Records back in 2009. At that time, a young Hopsin was simply hoping and wishing for his dreams to come true, and now that he has expanded his vision and view, there is nothing but renewed energy and a brighter hue. Hopsin has built a reputation for brutally calling a spade a spade and covering the walls of every arena that he has played with a consciously outspoken layer of barefaced pain. It is evident in Hopsin’s disposition both on and off of the stage that he has traversed through miles and miles of brutal terrain to claim his fame and place himself at the level of success that he has achieved and is encountering today. Hopsin is a refreshing example of a young musician who feels creatively liberated and doesn’t give a rats ass if his lyrical talent is deemed as overrated. Hopsin’s tracks contain stirring sonic layers throughout that stand out and create thought-provoking imagery that is paving its way into history. Following a straight-edge lifestyle and making sure that he doesn’t judge another for their choices along the way, Hopsin draws listeners in with his magnetic energy and aura that creates a feeling within of euphoria. Although Hopsin has enough potent lines to share for days, here’s 15 of his most off-kilter and explicitly audacious rhymes. 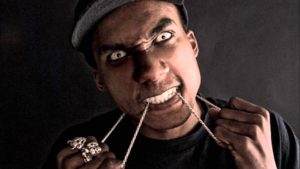 “Man I’m tired of the ghetto, hope I make it out this place

Ill niggas running around like an ape up out the cage

And it ain’t about the change, man these things are not the same

All these killers wanna leave my brain laying on the pave”

“When you was flossin’ on me tryna swerve in your hummer

I was plottin’ way bigger nigga, word to your mother.”

“I independently started this shit

No gasoline to start off the whip

Felt like the only nigga labels wasn’t bargaining with

My heart has been ripped, I stuck with it as hard as it gets

These producers would always blow me off

Now that I’m blowing up, they don’t recall.”

“Bitch had me feeling ill on my knees barfing my food

“You can say I have a bogus mind

I dim the lights and close the blinds

Around his neck is where my rope was tied

I yanked on it till I broke his spine.”

“Back when I was a young nigga playing in the sand

I had some big dreams so I made a little plan

You was out partying while I was thinking in advance

Trying to get right hoping that one day I’d be the man.”

Track – “Give Me That Money”

“These underground niggas think they on a roll

Then why you can’t get the double X-L cover honor roll?

Been years, you ain’t got no respect

I just watch y’all fall like the domino effect, nigga.”

“You see, I took a shot out of the glass of mischief

Made an album so raw the way you just had to get it, every track explicit.”

“You ever dated a woman that held you back?

She ain’t making no moves, you like, yo where the hell you at?

Life is valuable girl, I shouldn’t have to tell you that

Cause you grew up with some bums who knew nothing but selling crack.”

Track – “No Fucks Given”

“Why do we fight so often?

And if you ain’t doin’ somethin’ I like, then I promise you that I’ma be a little more patient.”

You ain’t got nowhere to hide

I’m knocking at your fucking door

You scared cause you know who arrived.”

“I wake up in the morning with this sensational pain

Engraved in my veins is your name, this ain’t gonna change

It is staying remain unless my heart is deflated and drained.”

“If you feel my pain then you can cry with me

This fuckin shady system is the rivalry

They the ones who raised us, turned us into cage nuts

They’re what we’re afraid of, they are why we ain’t us.”

“If you lost your wallet and I found it, I would not commit

To stealing it, but if the tables turned then you would pocket it

See I been me for so long, but I still don’t know who Hopsin is

How come I’m the one my teachers used to have a problem with?”

“You don’t really wanna roam in the darkness

You ain’t ready for the pain and the harshness.”