Although the Harlem former gang slanger has solely been adding his touch on features and hasn’t released a solo album in quite some time, A$AP Rocky is a true spitta that knows how to balance riling up a crowd at the club and sending soulful messages from the heart and purity of a dove. The 28 year-old stomped the scene back in 2011 with his first solo album, ‘Live. Love. A$AP’, and featured some obscure artists that you don’t typically even think of for a Hip-Hop feature such as Florence Welch aka Florence + The Machine. A$AP has been steamin’ up the fashion world as a spokesperson and model for some of the world’s major brands such as Dior, and although he does look rico suave from head to toe with his sharp tuxedos, we are ready to for some new jams though. Here are five of A$AP’s hottest rhymes. 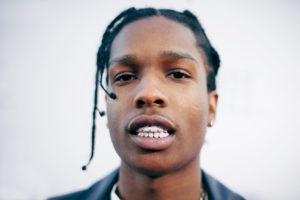 “Let’s take it to the basis, you in the midst of greatness
My Martin was a Maison, rocked Margielas with no laces
Cristal go by the cases, wait hold up that was racist
I would prefer the Aces, ain’t no different when you taste it
A 40 ounce to chase it, that’s just a understatement
I’m early to the party, but my ‘Rari is the latest
Somehow it seems girls in they late teens
Remind me your favorite jeans cause they naked cause you famous
Life’s a mothafucka, ain’t it? These other rappers ain’t us
So tell me what your name is, I’mma tell it to my stainless
You aim it ‘fore you bang it let that banger leave you brainless
It’s just me, myself, and I and mothafuckas that I came with
Miscellaneous niggas wanna hate on me
Until I tell ’em to they face they ain’t no G
Low key, niggas mad cause I’m smooth puffin’ Zig Zags
Tell ’em quit the riff raff bitchin’ with your bitch ass”

“Bloody ink on my pad spelled suicide
Michael Jackson even passed cause you scrutinized
Fuck illuminati lies, say I’m lucified
Baptised in the gutter, motherfucker you decide
Cause the ride come with doors that be suicide
Or the thighs on my whores, they be super-sized
Good and bad having wars, nigga, choose a side
Now all hail to the Lord like you do to God
Who am I, Lord Flacko
Painting vivid pictures, call me Basquiat, Picasso
Capo Head Hancho, now my following’s colossal
Ain’t no boxer, Pacquiao, but got the chopper todo caso
It’s like you heard, God spoke, I’ve seen the ghetto gospel
The choir like my reefer and the preacher got my eyes low
Sister Mary Jane to make me sleep from singing high notes
The bible or the rifle, goodnight folks”

“Back once again, sipping Henn, mixed with juice and gin
Bitches in, couple lady friends countin Benjamins
Spinners spin, on the 20-twins that Mercedes-Benz
Dividends made a change of plans well that all depends
Shout-out my parolees and I smoke that OG
Kush mothafuck the police, all my niggas rock gold teeth
So hood and we so street, sipping on that codeine
We hustle hard no sleep, your bitch loose that’s no leash
I ain’t talking ’bout no money, I ain’t talking ’bout no cars
Talking ’bout no diamonds cause that shit is a façade
Times is really hard, I fucked a couple broads
Smoked some purple out the jars, let me tell you who we are”

“Pass the mothafuckin’ Swisher, pour some mothafuckin’ liquor
For my mothafuckin’ niggas who ain’t wit us, keep it trilla
My gold teeth, my french braids, getting throwed since 10th grade
Wealth is in the mind, not the pocket, if that’s the case, then I been paid
Herringbone chain, my gold frames, my Cartiers, you small change
You bitch made, I’m old school like gemstars and switchblades
I spit game, I get paid, a pimp game
I be, I be that pretty muthafucka, A$AP is just my nickname
(I’m comin’ down when I’m tippin’ on them 4’s
Cause we shittin’ on these, shittin’ on these niggas and these hoes)
Cause that purp shit I sip up, your bitch chose, you slipped up
I get-get my dick licked, I’m draped out, drip-dripped up
Top of the top of the line, all on my grind, purple be easin’ my mind
We runnin’, runnin’, we gunnin’, gunnin’, we’re gonna hit one at a time, time
Them bad bitches blow kisses by my earlobe, a weirdo but I’m real though”

“It’s about to go down, drunker than a bitch
Afterparty with my niggas slumber party with your bitch
Finna hit the lick, 10 56, takin’ sips, let the syrup sit
Let it get the mix, everyday we gettin’ gettin’ lit
That Purrp purp and I get lit, ‘methazine, tell ’em sip this
I’m on that Memphis, that 666, Trip Six shit, bitches
A 50 box of them Swishers, gold slabs on them 6’s
In the back seat full of bitches, tryna hit licks, we gon’ get lit”