East Harlem rapper, Dave East, makes it known that he came from nothing and is certainly making waves in the music industry by turning nothing into something. Dave has been spittin’ out mixtapes ever since 2010 and fellow NYC King, Nas, got a hold of his talent and put Mr. East on the map. Whether delivery ballads full of swagger or talking about how real life gets in the streets when you have nothing to eat, Dave East has a track for everyone who has been through the ringer. Abounding with infectious hooks and beats, Dave East’s discography is one of the most underrated in the game at the moment and his most recent release, ‘Kairi Chanel’, proves that very point with tracks such as “The Real Is Back”, “From The Heart” and “Can’t Ignore”. Although XXL put Dave in the spotlight as one of their 2016 Freshman class members, be on the look out for Mr. East to have the best year of his life in 2017. Here are five rhymes from his discography that’ll put a major influence on you and showcase what Dave East has to offer. 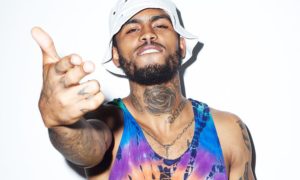 “I really wrote my way up out of 6E
Develop relationships with fiends, I know they miss me
Before the metrocards, it was tokens, I did the ten speed
Never had wrote a rhyme in my life, what was a sixteen?
At sixteen, arrested in housin’, trips to the mountains
Came right back, trappin’ off couches, watchin’ for mouses
Only tools we was posed with, had a spot, smoke lit
The hate is just confusion, pay attention how them jokes switch
Diadora was my favorite, the Mark Buchanans
Mama couldn’t afford them, I learned everythin’ on the border
That’s a big 8, Clicquot parties with private dancers with no mixtape
Bumble Bee Tuna, now we could get steak
I persevered, composition, I kept it close
Competition near, I’m a Spartan without the spear
Three hundred rhymes, it was written before I wrote it
Opportunity knockin’, might miss it, that window closin’
This poetry in motion, I’m a poet”

“I’ve been feeling like this since I buried Lee
Waking up in cold sweats, paranoid I rarely sleep
I might be smiling to the public but inside I’m dead
All I see is bodies, bunch of memories inside my head
[?] caught a leg shot, shook it off, he walking now
Told me if he ain’t got his hammer then he don’t he walk around
[?] daughter growing, look at [?] she talking now
Pooch caught the same shot so he cautious now
I’m too familiar with pain, I watched my aunt pass
Her and pops smoking, I was tryna catch a contact
My man sold cable, they hired him up at Comcast
He ain’t wanna give up his jewelry, his life had cost that
Drugs done had you watch your uncle like y’all ain’t related
I’m from where niggas will kill just so you don’t make it”

“Imagine your whole block get indicted
Never thinking that for your freedom you will be fighting
You was only focused on getting back by the nights and
If he ain’t had the time you was robbing him for his Brightling
Robbing them for they Cuban or anything they was moving
You caught a hot one last summer, you still grooving
Home invasions, living rooms you been intruding
Your mother gave you everything, you shoulda been a student
Shoulda went to college, experience is the best teacher
Never listened, you shoulda took in that knowledge
Learned how to watch for grimy niggas like Knxwledge
Who am I to judge? I got knocked for a couple dollars”

Track – “From The Heart”

“Retro Jordans from Ninety-One
Balmain jeans with the zipper
I’m from a grimy slum (East side!)
Where they get your mommy hung
Chain smoking that potent
Like I ain’t got a lung
Play tough if you want
Shots fly, them niggas gotta run (prrr!)
Jim Carrey, put on my mask, pull out a Tommy gun
Morgue’s running out of space
The East is where them bodies from
Heard he likes to talk, torture tactic
We’ll rip out his tongue
‘Til I’m dead, I’m after bread
I come from without a crumb (nothing!)”

“Bagging up, knocking the purple tape
Outside all night, my moms was working late
I gotta go get it because it hurt to wake
I don’t talk about much, some shit it hurt to say”