Although the man and Tennessee gangster rapper currently earned himself a spot in the pen, true Hip-Hop heads have been riding with Young Buck ever since his 2000 release, ‘Thuggin to the End’, and continue to do so while he serves his time. The G-Unit member made his mark as a solo album and dished out bangers such as “Shorty Wanna Ride” and “Stomp” that made your speakers bump. Young Buck never really blasted off on the scene, but that wasn’t his intention; Young Buck delivered the goods just as they are and never fronted about his scars that he gathered when he was living a dirty life in the streets. Here are five of Young Bucks dopest rhymes. 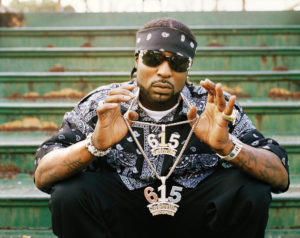 “I’m reloaded, my bankroll swole and a nigga can’t fold it
I got em like hey, got em rolling
The kush on the way, and the champagne frozen
Watch me do my thang, I got these hoes open
I’m riding Presidential, like the shit that I’m smoking
Water whip the work, Patrón on my shirt
And a zip ain’t shit, I need a quarter P of Purp
Gon break it down, pass it all around
I can serve Whitney Houston and Bobby Brown
Them dope boys in this bitch like, let me buy that
Broke niggas in this bitch like, let me try that
I need a beat in the bitch, let me call Polow
Mr. Tennakey I still get em for the low though
Shawty light up the dro, I ain’t ready to go
Can’t ban me from the radio or fuck up my show, you know”

“Don’t question me about nothing I don’t owe nobody no convo
Wanna do somethin’ fo me then make my little brother bond ho
Might order me a few bottles, bring it to me with the sparkles
A couple partners just came home, just dropped all the charges
And this ghost is lookin’ gorgeous
I think I might just set this bitch or forgis
1 time for my old homie he died behind that gold Roley
2 times fo them broke bitches been actin’ like they don’t know me
Yes I am the new wave with these black shades and my new J’s
And I got the Unit sittin’ back ontop like Toupee’s
I like all my pussy paid, I eat all my pussy shaved
Produc-Product of these projects, I’ma sell my dope regardless
Back gettin’ money with 50 but i still feel like i’m starving
Ho ye I know what I’m chargin’, bitch don’t start all that arguing”

“I hear ’em talking, but he ’bout to get that ass stomped
Watch I get the club crunk; I’m a make ’em stomp
We ain’t playin’; wanna front?
Get that ass stomped
Do it like them Dirty-South boys do and stomp
Now where you from?
Who the boss?
I’m a break ’em off”

“I been out here for too long, I deserve to get a bird
The fiends know my name now from standin on this curb
I got blood on my shirt, and a handful of crack
A bunch of lil’ niggas with dime sacks in they backpacks
Come and get it we got it, take a trip to the projects
You see the police, but we gon’ sell our dope regardless
You niggas know me, from fillin up your heron needles
I’m connected with them people who don’t speak no English
We ain’t scared of the roll, we just get it and go
You see them Tennessee tags nigga you already know
I don’t trust no ho, that’s how T got popped
He showed a bitch where his stash was, she told it to the cops
Me and Priest had the streets on lock
He’d break down the blocks, I’d open up shop around the clock
And I ain’t gon’ stop, so soon as you come home from the pen
We at it again, we gettin ’em for ten my nigga”