Editor’s Note: We will keep you updated as soon as we get more info about the tour dates.

It is a known fact throughout the world of Hip-Hop that the elusive and beloved singer, Frank Ocean, does not come out of hiding often and if he does, it is practically an experience rendered as a National Holiday. Frank bailed on his 2015 scheduled headlining gig at FYF Fest in Los Angeles, California and was immediately replaced by Mr. Kanye West. Ocean’s last festival performance was at the Bonnaroo Music & Arts Festival on June 14th in Manchester, Tennessee. The puzzling R&B hermit also shut down the internet in April of 2015 with his artificial announcement full of hashtags stating that he was in the midst of recording his third studio album which would later be released in July of 2015. The brilliant lighthouse full of golden talent’s came out with courage and openly expressing that he was discombobulated and dealing with crippling mental concerns that have inhibited his exposure in the world of glitz and glam while waited on the edge of their seats as the thirst reached new heights. Frank released ‘Blonde’ on August 20th, 2016 and it instantaneously morphed into a classic hit. 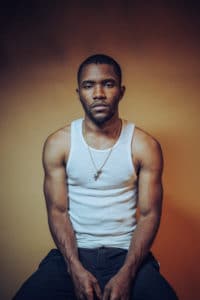 Following the success of his latest album, ‘Blonde’, Frank Ocean will be making his highly anticipated return to the stage as the headliner of Hangout Festival in Gulf Shores, Alabama and also as a performer at The Sasquatch Music Festival in Quincy, Washington from May 26th-May 28th. Frank is also scheduled to make appearances in Europe at The Northside Festival in Aarhus, Denmark on June 9th, 2017 and also at The Lovebox Festival in London on July 14th, 2017. In celebration of Frank returning to the stage, here are five of Frank’s most passionate verses to hold you over while you anticipate the day that Frank lights up the stage.

“Can’t keep up a conversation
Can’t nobody reach you
Why your eyes well up?
Did you call me from a séance?
You are from my past life
Hope you’re doing well bruh
I been out here head first
Always like the head first
Signal coming in and out
Hope you’re doing well bruh
Everybody needs you
Everybody needs you
Oooh nani nani
This feel like a quaalude
No sleep in my body
Ain’t no bitch in my body.”

“Now and then you miss it, sounds make you cry
Some nights you dance with tears in your eyes
I came to visit ’cause you see me like a UFO
That’s like never, ’cause I made you use your self control
And you made me lose my self control, my self control.”

“You always smokin’ in the house
What if my mother comes over?
You can’t get up and get a job
Cause this little hustle’s getting you by
You’re the dealer and the stoner with the sweetest kiss I’ve ever known.”

“When we were kids, we handpainted strawberries on a swing
Every moment was so precious, then
I’m still kicking, I’m daydreaming on a strawberry swing
The entire Earth is fighting, all the world is at its end
Just in case, an atom bomb, comes falling on my lawn
I should say and you should hear, I’ve loved
I’ve loved the good times here, I’ve loved our good times here.”