The British-American rapper, Slick Rick’s, third studio album, ‘Behind Bars’ on Def Jam Recordings serves up material that lands on the brilliant end of the spectrum and serves up lyrical bliss that is far from seldom. Abounding with tracks produced by Hip-Hop heavyweights Easy Mo Bee, Pete Rock, Warren G and Prince Paul, the album starts off with bang that surprises the average chit-chat of looking fly with a gold chain. The first track and album title, “Behind Bars”, slices conformity in half with lyrics such as “Case dismissed, but your honor, DA kindly prevented it. He told to the judge, don’t free him, this brother trigger wars, and not just that because I refuse to wash some jive nigga drawers” seeps the message that Slick Rick perceives himself above the law into your pores. Rounding into the third track, “Sittin’ in My Car” featuring the legend, Doug E. Fresh, overshadows any and all of Slick’s creative shortcomings and gets your speakers thumping with lyrics putting one of his ladies on blast as he sits in his whip and patiently waits for her as time slowly passed.

Slick gets down and dirty over the classic bangers fifth track, “Cuz It’s Wrong”, while taking listeners on a journey of his tongue that licks each and every detail of one of his ladies aesthetics. Sounding ridiculous yet still drawing in listeners to his lyrical prowess, Slick teams up with Pete Rock over the album’s eighth track, “Get a Job”, that spills the beans to his baby mama that he is fed up of her nonsensical drama. The tenth track, “It’s a Boy (Remix)”, talks about Slick’s adventures as a young lad and the revelation and realization that he is following in the footsteps of his Dad. As one of Hip-Hop’s greatest storytellers, Slick Rick’s 1994 musical heater is still too good and catchy to ignore. 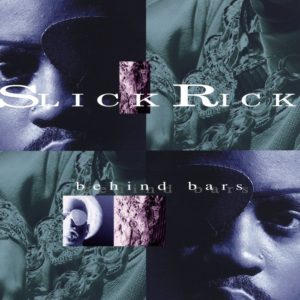 5  Hottest Rhymes from ‘Behind Bars’

I still found myself wanting the honey quite bad”

4.” Quoting from the bible, telling me to have a heart

So I shove aside the price, cuz I asked her, I’m above it

Until we asleep, she’s like master, I love it”

Seein’ as I’m loyal and livin’ on soil, it’s best when you have someone to spoil

So any toy, he wants he gets, yo kids ain’t worth it midst the toys

That they destroy, annoy, though me and his moms in middle of fits of joy.”

Fifty years old, and still you living with your parent?”