Atlanta rap group, Migos, which consists of Quavo, Takeoff and Offset have took off in the Hip-Hop with a star-studded team backing their impact and journey including Gucci Mane and Young Jeezy. Their 2015 debut studio album, ‘Yung Rich Nation’ received nothing but positive feedback from top news source and the guys are on the verge of releasing their second studio album, ‘Culture’, on January 27th, 2017. Migos discography is brimming with a mixture of real life situations and catchy hooks that distinguish them from the young contemporaries that are simply spittin’ about bitches, hoes, drugs and money. Due to the amount of ammo that their first album and features contain, I perceive that ‘Culture’ will top the Hip-Hop charts and rev up the impact to come that Migos is destined to make on the game. Here are five rhymes stemming from Migos discography. 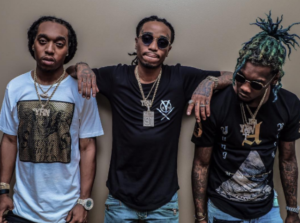 “Add it up like a new calculator
In the trap with two guns like I’m Tomb Raider
Hop on the track with no pen or paper
We blowin’ up, I got that detonator
You could add up the dope like accountants
Put that dope in the water, don’t drown it
Add it up right now, bet it motherfuckin’ lookin’
Like a nigga livin’ up on a mountain
I dreamed I woke up in Phantoms, naked bitches in a mansion
I did my calculations, most of you rappers is imitatin’
They back on the island, I’m contemplatin’
Should I shoot to kill in my situation?
Mama said “Quavo, better stay patient!
The dirt that I done you add up the cases”

“Pour a four, I’m droppin’ muddy
Outer space, Kid Cudi (drank)
Introduce me to your bitch as wifey and we know she sluttin’
Broke a brick down, nutted butted, now that nigga duckin’
Don’t move too fast I might shoot you (huh?)
Draco bad and boujee (Draco)
I’m always hangin’ with shooters (brrah)
Might be posted somewhere secluded (private)
Still be playin’ with pots and pans, call me Quavo Ratatouille
Run with that sack, call me Boobie (run with it)
When I’m on stage show me boobies”

“Fuck nigga my young nigga walking with steel fo’ real
Pull up in black, get in the caravan hop out kill a nigga Kill Bill
OG gas bag in the MCM
I got more trees than Timberland
Climbin’ the top of Mt. Everest
You in the presence of a rich nigga chest
Young rich nigga I seen a mill
All of my lean double-sealed”

“I’m making your trap look like dinosaurs
Extinct, Jurassic
I’m whipping that pot on a Gangsta Grill
Shout out to Drama dramatic
Who the fuck told you that you can sell dope and step right on my block?
And how many times have I told you I do not fuck with the cops?”

“King of Versace, Medusa my wifey
My car is Versace, I got stripes on my Mazi
I’m dressin’ so nicely they can’t even copy
You’d think I’m Egyptian, this gold on my body
Money my mission, two bitches, they kissin’
My diamonds is pissin’, my swag is exquisite
Young Offset no preacher but you niggas listen
Them blue and white diamonds, they look like the Pistons
Codeine sippin’, Versace
I’m grippin’ them bands in my pocket
You know that I’m livin’
I’m draped up in gold, but no Pharaoh
Rockin’ handcuffs; that’s Ferragamo
Bricks by the boat, overload
I think I’m the don, but no Rocco
This the life that I chose
Bought out the store, can’t go back no more
Versace my clothes while I’m sellin’ them bows
Versace take over, it took out my soul”